Home > Blog > IP VPN vs VPN | What are they? What’s the difference?

IP VPN vs VPN | What are they? What’s the difference?

VPN is short for Virtual Private Network. VPN creates a private network over a public network for encrypted communications.

VPNs are widely used in enterprise networks because they can be installed on servers, hardware, and software.

VPN is a type of remote access technology that uses a public network to build a private network for users. So what is remote access? When you want to work from home, or when someone from another country wants to work on the company Intranet, such access requests are called remote access.

However, some people will question, why not choose the dial-up line to access the enterprise Intranet directly?

Of course, you can, but it can be a security risk for businesses and individuals.

Some traditional enterprises choose to use leased DDN lines (which provide users with dedicated medium and high speed digital data transmission channels, so that users can use it to organize their own computer communication networks) for remote access, but this kind of equipment is relatively old, and enterprises need to pay more expensive communication costs and equipment maintenance costs.

VPN essentially uses a series of encryption technologies to install a data exchange channel on the public network.

After a VPN server is installed on the Intranet, the Internet is connected to the VPN server when remote users want to access Intranet information. Then the VPN accesses the desired website.

The VPN in the middle transmits information to servers and user devices on both sides while encrypting the data. This encryption process makes much of the data “unreadable” to the outside world as if it were a separate channel, but in fact, a VPN still uses a public network.

The working process of the VPN 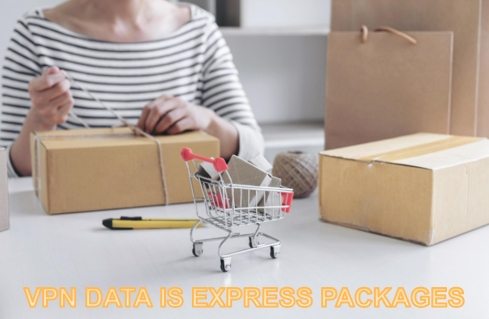 Because communication is bidirectional, gateways at both ends of the channel must know the destination address of the packet and the remote VPN gateway address to ensure the correctness and stability of information transmission.

The advantages of VPN

Home and business travel are no longer barriers to not being able to work, and business partners and others can take advantage of locally available high-speed broadband connections to connect to corporate networks.

It provides an Internet infrastructure that is easy to set up so that both new and old users can quickly pick up and easily add to the network.

It establishes tunnels. Encryption and identity protocols protect data from outside prying eyes, effectively preventing data theft and other unauthorized devices from reading the data.

Wan traffic is unstable and bandwidth utilization is low, the traffic distribution is polarized. During peak traffic periods, network bottlenecks are caused due to congestion, which greatly affects the transmission of real-time data. However, a large amount of bandwidth is idle during low traffic periods. VPNs use traffic control policies to arrange bandwidth based on priorities to prevent congestion.

VPNs are fully managed by the user, making it easier for everyone else to use it.

The cost of traditional long-distance dedicated lines is huge. VPNs only need to connect new nodes and provide the communication rules between new points and other points at a relatively low cost.

The disadvantages of VPN

Users need to sign a contract with a VPN supplier to keep the service running. Individuals can’t directly interfere with VPN performance. Creating a VPN is a complex process, so it’s important to find a good vendor and sign a reasonable contract.

VPN products and solutions from different suppliers are sometimes incompatible, driving up the cost of using the device.

Any advanced encryption can be breached as users roam between access points.

What is IP VPN

We already know what VPN is. We know that it takes a lot of money and energy to buy the equipment, design and build the lines, and carry out daily maintenance. Even training can be costly. In this case, you need to purchase the VPN service provided by the suppliers. IP VPN is also a service they provide.

Based on the Backbone network owned by the supplier and using the advanced multi-protocol label switching (MPLS) technology, the IP VPN service provides end-to-end service quality assurance and security services for enterprise users to build an internal private network.

Generally, IP VPN service suppliers have professional technical teams and a relatively large operation scale to help users to establish a more mature and stable network, which saves a lot of time and unnecessary capital consumption for users, and at the same time enables users to have a better experience.

The difference between VPN and IP VPN

The tunnel can ensure security. Therefore, IP VPN also uses the channel mechanism to make the encapsulation mode and address information of VPN packets irrelevant to that of the bearer network.

However, while IP VPN is very similar to VPN, they are different.

VPNs belong to layer 3 and layer 4 of the OSI model and, as mentioned earlier, build channels over the public network, which means that the VPN still relies on the public network. And no matter how you defend it, using a public network means you may face bandwidth deficits (denial of service) and slow speeds.

However, IP VPN belongs to layer 2, which means that it is off the public network and connects to the site through a private network, which ensures the efficiency and security of data transmission.

VPN is recommended if you are working for an individual’s daily life or for a small startup where you don’t need to telecommute. Because A VPN can meet your data transmission and security needs without paying excessive costs for maintenance, resulting in a personal economic burden.

But if it is a large enterprise or a major organization, IPVPN is the best choice. Because IP VPN can meet the demand of access from different places, it is more efficient and more secure. And large enterprises can support the cost of operating an IP VPN.

For suppliers, IP VPN is a business scope with great potential, and improving better IP VPN services is the need of The Times.