Home > Blog > Two ways to Close a Browser in Selenium!

Two ways to Close a Browser in Selenium!

Do you want to know something about Selenium? Well, congratulations on finding it!

In this article you will learn:

UI automation testing: The UI automation tools of the industry, such as WebDriver, Selenium, etc., are usually used to verify the functions and performance of website business logic by opening a browser and simulating user operations.

A Firefox plugin that can record the user’s basic operations and generate test cases. These test cases can then be run and played back in the browser, and the test cases can be converted to automated scripts in other languages.

Selenium-RC allows you to extend for large test cases or test cases that need to be run in different environments.

The version of Selenium

The core part of the Selenium1.0 (Selenium RC or Remote Control) tool is implemented based on the JavaScript codebase.

In October 2016, Selenium3.0 was introduced to separate the core API from the client driver and remove the less-used Selenium RC functionality.

The function of Selenium

The main functions of Selenium include testing browser compatibility and system functionality.

Test compatibility: Test the application to see if it works well across browsers and operating systems.

The bottom layer of the framework uses JavaScript to simulate the operation of the browser by real users. When the test script is executed, the browser automatically clicks, enters, opens, and validates the script code, just as a real user would, testing the application from the end user’s perspective.

Makes it possible to automate browser compatibility testing, although there are still subtle differences between browsers.

Simple to use, you can use Java, Python, and other languages to write use case scripts.

The advantage of Selenium

Selenium tests run directly in the browser, just as real users do. Selenium tests run in Internet Explorer, Chrome, and Firefox on Windows, Linux, and Macintosh. No other testing tool can cover so many platforms. There are many other benefits to using Selenium and running tests in a browser.

Selenium is completely open-source and has no restrictions for business users. It supports distribution and has a mature community and learning documentation. Here are the main benefits:

By writing Selenium test scripts that mimic the user’s actions, you can test the application from the end user’s perspective. By running tests in different browsers, it is easier to find browser incompatibilities. The core of Selenium, also known as the Browser Bot, is written in JavaScript. This allows the test script to run in a supported browser. The Browser Bot is responsible for executing the commands received from the test scripts, which are either written in HTML table layouts or in one of the supported programming languages.

Selenium works in the following browsers:

How does Selenium relate to Python and WebDriver? 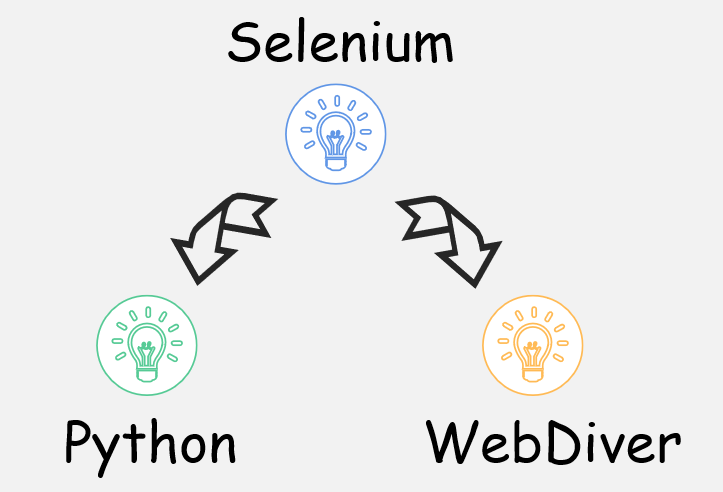 Relationship between Selenium and Python

Python is an object-oriented, literal computer programming language. Is also a powerful and perfect universal language, has more than ten years of development history, mature and stable. Python has the richest and most powerful class library of any scripting language, enough to support most everyday applications. Python syntax is simple and clear, and it has a rich and powerful class library. Often nicknamed the Glue language, it makes it easy to link together modules made in other languages (especially C/C++).

Selenium can use the Python language to call Selenium RC for testing.

Relationship between Selenium and WebDriver

With the continuous development of Internet technology and the security limitations of browsers on the JavaScript language, the development of Selenium has encountered many difficult difficulties. Due to its own implementation mechanisms, Selenium is unable to break through the browser sandbox, making testing requirements for many test scenarios difficult to implement.

In 2006, Google engineer Simon Stewart started WebDriver, a project that lets test tools call built-in methods provided by browsers and the operating system itself to bypass the sandbox limitations of the JavaScript environment.

The difference between the close() and quit() methods

In some cases, we need to open more content than a browser with multiple tabs. To close these meetings quit() and close() methods, Selenium is used. But there is a difference.

Close: Used to close the current window. When many open Windows are open, use close to close some Windows.

Quit: Exit the driver and close all associated Windows. End the process and close all Windows. The close() method is used to close one of the Windows opened during the execution of the use case.

print driver.window_handles  # If you have any window handles, you can see that the first two Windows are still in place

driver.quit()  # see that all Windows are closed

# Here Chrome will be used

# Here Chrome will be used

# All windows related to driver instance will quit

Registrate gratis
WebGL vs Canvas | How do they relate to Fingerprints?